Around the world with Terri Colby

Follow this travel writer as she hits the road.

An award-winning writer and editor, 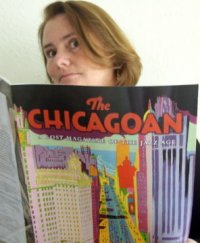 Terri Colby is a Chicago journalist who loves to travel. Recent international destinations have included India, Spain, Britain, Canada’s oh-so-lovely British Columbia and Mexico, a perennial favorite. Spas always seem to be a part of the itinerary. Turkey and Morocco are high on the list of  must-visit locales.

Terri’s  wide-ranging career has included stints at The Chicago Tribune, The Associated Press and the Minneapolis Star Tribune. Her most recent posts at the Chicago Tribune were as a features editor for the Travel and Books sections. Books are her other passion and there will be regular book reviews posted here in a category called Reading on the Road.  Terri holds a bachelor’s degree in Journalism and a master’s in Public Affairs Reporting from the University of Illinois.

When she’s not on the road or writing about travel, Terri is a freelance writer and editor whose clients have included Columbia College Chicago, the John Marshall Law School, the Chicago Architecture Foundation, Forbes Travel Guide’s new online site and the College of Education at the University of Illinois Chicago.

A Chicagoan by birth and by choice, Terri is serious about exploring the world, but  there’s nowhere else she could ever call home. Her husband and two children share her love of travel, but she’s been known to leave them at home when she hits the road.

Terri has had travel pieces published recently in the Los Angeles Times, Chicago Tribune, Chicago Sun Times and Cafe magazine. She also writes for a number of online endeavors in addition to this blog, including Examiner.com, where she is the Chicago Getaways Examiner, writing about destinations worldwide for a Chicago audience, GoGalavanting.com and Stripedpot.com, a new travel zine.

A member of the Society of American Travel Writers and the Association of Women Journalists, Terri also takes photos to accompany her stories and loves the view from the front seat of a float plane that she documented in the photo at the top of this page.